Here is my third installment of what will eventually be a total list 50 books that I think are essential reading.

*Guns, Germs, and Steel: The Fates of Human Societies by Jared Diamond 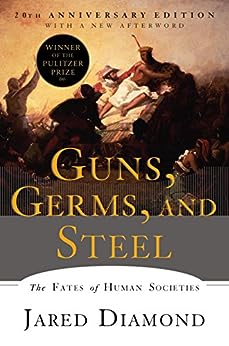 This Pulitzer prize winning book is an incredibly thought-provoking look at how different societies developed and how some came to dominate and conquer others; specifically how European powers came to colonize much of the world.

The general theory is that the mean reason that Europeans were the ones to benefit from Guns (military advantages), Germs (immunities to diseases that decimated other populations), and Steel (technical advances) was a fortunate set of circumstances due to geography, flora, and fauna at the beginning of civilization which gave Eurasian societies a distinct advantage over societies in the Americas, Africa, and Australia.

The book can be a little daunting but is fascinating when you read the details of Diamond’s analysis that incorporates a variety of disciplines (geography, biology, archeology, etc.).  It also helps to gain better understanding of different cultures, as well as fights the myth that Europeans are somehow innately superior to other peoples.  A rigorous study of this book should help one to think more critically about why balance of power in the world happens to be the way it is. 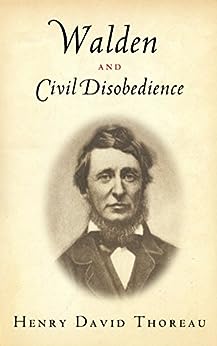 For those of you that ever have that feeling that you just want to run away from it all and live like a hermit in the woods, here you go.  This is Thoreau’s reflection on his two years living simply in a small home he built in the woods near Walden Pond.  The book also serves as a love letter to nature and a treatise on a variety of aspects of life and society.

Given that Thoreau wrote this in the mid-19th Century and with a philosophical bend, the prose can be a little verbose and difficult at times.  But luckily, it is relatively short overall, which makes it more approachable.

Also, one of the instances that occurred during this time, and that he briefly writes about in Walden, was being arrested because he refused to pay taxes due to the US Government’s support of slavery and the Mexican-American war.  This eventually led to his famous essay, Civil Disobedience, which helped to inspire the nonviolent resistances movement of Gandhi and MLK.  I recommend reading Civil Disobedience along with Walden to gain an even deeper understanding.

Reading these works encourages one to take stock of the world and our role in it.

*The Handmaid’s Tale by Margaret Atwood 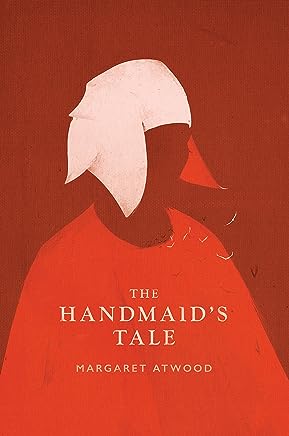 I was inspired to read this book since it and its adapted television series have become regularly referenced in the political arena, including some women dressing up as “Handmaids” to protest, especially about abortion.

First, the book itself is extremely well-written.  It is a compelling story and moves along at a good pace.  I personally enjoy the use of flashbacks to fill out the world-building.  My only quibble with the story was that I found it unbelievable how rapidly (only a handful of years) society went from our current modern value system to the dystopia described.  However, that is for an in-depth review/discussion of the book.  Other than that, I found it to be a great read.

It also gives perspective into the fears that some women have about being treated as inferior objects whose only purpose is serve men domestically, sexually, and for procreation.  It is a perspective that all men should consider when women’s issues are discussed, especially given how women have been treated throughout human history.

That being said, I do have to say this.  A struggle I had while reading the book was that I found myself becoming angry at the aforementioned protesters who are referencing The Handmaid’s Tale.  This is because politics is already far too heated and hyperbolic.  And there is world of difference between someone being pro-life because they believe that human life begins in the womb and someone trying to bring about a dystopia where women are slaves and breeding stock.  When protesters make that egregious logically fallacious slippery slope argument, it is inflammatory and destructive.  It is an extremely emotional issue and both sides need to find better ways to debate it.

Politics aside, again, it is an extremely well-written, thought-provoking book that is driven by a good story.

Any Collection of Philosophical Writings 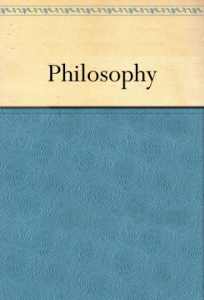 “The unexamined life is not worth living” according to Socrates.  I could not agree more, and ever since I read Plato’s Republic in college, and Socrates’s philosophical style within, I have enjoyed struggling with philosophical writings and trying to comprehend what history’s great thinkers made of life.  Admittedly, many of these historical philosophical writings are extremely difficult.  More than half the time, I am completely lost.  However, I find it a great mental exercise to attempt it.  And if I’m lucky enough to understand what they meant, then I can go further and really dwell upon it.

I feel that such an exercise is great for everyone.  Even just reading simplified versions of what different philosophers have written.  Then, one can contemplate those deep mysteries of existence. To be clear, I am no “philosophizer” (had to throw the Dodgeball reference in), so I don’t have any particular recommendations for specific readings.  I simply recommend finding a collection that seems to speak to you and have fun trying to find the meaning of it all.

*Where the Sidewalk Ends by Shel Silverstein 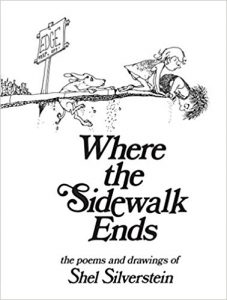 To be honest, I don’t remember whether I liked Where the Sidewalk Ends or A Light in the Attic more. I’m going with Sidewalk because it is on Amazon’s list.  Also, when I was looking at which poems are in each book, I distinctly remember loving “Captain Hook” and “Crocodile’s Toothache” which are both in Sidewalk.  Regardless of specific books, the warped and wonderful poems and illustrations of Shel Silverstein were a true joy of my elementary school days.  I think they may have helped me develop my later love for surrealism and irreverent humor.  If you did not study these darkly whimsical poems and drawings as a child, first of all, you have my condolences; and, second of all, you must remedy that immediately!

“There, but for the grace of God, go I” is a saying that I have long appreciated.  The awareness to look at someone in a difficult situation and know that it is only because of the mystery of God’s will, a twist of fate, a different role of the dice, that you are not in that situation yourself.  It could just as easily be me.

This philosophy came further into relief for me over the past couple of weeks due to a couple of news stories in the world, that I happened to have a tangential connection with from my travels almost exactly a year ago.

The first was the Ethiopian Airlines crash on March 10.  The flight was en route from Addis Ababa, Ethiopia to Nairobi, Kenya and I happened to have flown that same route on Ethiopian Airlines almost exactly a year earlier.  As it turns out, I don’t believe the airline was flying the new Max-8 planes at the time, so it is not like I had been at any elevated risk or anything.  However, when one realizes a connection like that, even if rather tenuous, it gets you thinking about what could have been if things had been slightly different.

As fate would also have it, that same day I was flying on Ethiopian airlines, I sat next to a fellow world traveler on my flight into Addis Ababa.  We were both travelling to Africa from India, and spent much of the flight swapping travel stories.  We then exchanged information and have maintained the typical Facebook friendship of random people whose paths happened to have briefly crossed.

Last weekend, he posted on Facebook about his cousins, a family of Syrian refugees.  On Wednesday, two of his cousins, a father and son, were the first of the Christchurch victims to be buried.  Victims of unadulterated hate.  Whenever such tragedies occur, especially on the other side of the world, it is only natural to put up mental defenses and distance yourself from them.  However, when you find yourself slightly connected, even by a couple of degrees of separation, it elevates the reality of the situation.

But I am not referring this philosophy to possible connections to tragedies and close-calls.  I am writing this about the toxic worldview that the shooter has and that far too many people in the world share, albeit in often more subtle ways.  This evil concept of superiority and contempt for the other.

That evil is the exact opposite of the philosophy espoused by the phrase “There but for the grace of God, go I.”

I happened to have been born a straight, white, Christian, male in middle-class America.  I had nothing to do with that.  Even most of my morality has more to do with how I was raised by my family, as opposed to anything I did on my own.  This was all the accident of my birth, fate, the grace of God.

As such, I have no claim of superiority over anyone.  I have no right to judge them.  I could just as easily be them.

There are legitimate debates to be had about topics such as immigration and refugees.  It is absolutely valid and even imperative to raise security, economic, and logistical concerns.

However, if and when you begin to think of yourself as somehow better than those that are different; if you look at and speak about immigrants (legal or illegal) and refugees as somehow beneath you, as invading pests; you are crossing the line between legitimate concern and illegitimate hate.

So please remember, whenever talking to or about people of a different religion, or ethnicity, or gender, or economic status, or sexual orientation, or political affiliation, you could just as easily be them, if not for the workings of fate.  Therefore, we all need to maintain humility in light of that fact.

To take it to a higher level, we even need to remember it when discussing and dealing with people who are seduced by hateful philosophies.   We must remember that if we were in their position, we may also feel similarly.  Therefore, we must not match hate with hate, but, rather, find ways to bring them around and reconnect them with the common humanity they share with others.

In the end, we must refrain from judgement and feeling of superiority towards anyone.  Because whatever my situation may be and whatever your situation may be, our situations could just as easily be switched.  And it is especially critical to remember this as we consider people who find themselves  struggling and desperate for a better life.  Because they, but for the grace of God, are us.