As I type this, I am sitting under a dark sky in the bow of a boat travelling up the Amazon river.  At first that sentence was just a mundane statement of fact.  Then, I thought about it again.  Holy crap! I am on a boat travelling up the Amazon River!  A shooting star went across the sky in front of me literally as I turned on my tablet to type this!  Sometimes we get so caught up in the routine and mundane, that we forget to appreciate where we are, and to be truly excited about opportunities in life.  When we are luckily to have those realizations, sometimes it is worthwhile to think about how it is we got to be in the situations we find ourselves (whether they be good or bad). 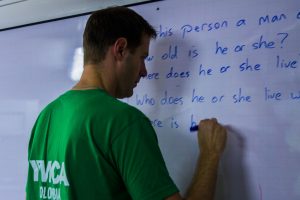 With that intro, I want to tell you about the program that kicked off this adventure, and brought me to Colombia about six and a half months ago, and how I got started on this trip.  At the beginning of 2016, I began researching volunteer and work abroad programs, because I wanted to do something more long term in another country than my usual two-week vacation, and I wanted it to be meaningful in a social impact sense.  I also wanted to do something different than the usual teaching English abroad that most people do when they get bitten by this “work and travel abroad” bug.  During the course of a couple of months of online research, I came across something that seemed rather interesting: a 6- or 12-month program run by YMCA in Colombia that supported English learning and cultural exchange part-time, and then spent part-time volunteering with the YMCA.  The name of the program is Prints of Hope.

I applied and was accepted in the spring of 2016, and was planning to start that summer.  However, the 2nd launch of a dual-launch contract that I had been working on since starting at SpaceX was pushed into the summer.  Therefore, I decided to defer the program until the start of 2017, which also allowed me to save some extra money in the meantime to help travel after the program finished.  And in mid-January, I arrived in Bogotá, Colombia to start upon this new path.

The program worked in partnership with IENA, an agency that does international exchange programs.  The combination of IENA and YMCA-Colombia helped me through the process of getting my visa, as well as helping me get set up with a place to live when I arrived in Bogotá.  I ended up living with three other participants in the program: Elena and Chloe from the USA and Laura from Brazil.  So, yeah, I lived with three girls.  That experience can be discussed in another blog post.  (Or maybe it is better if I don’t.) Kiara and Juan Carlos were our coordinators at the YMCA that basically were our support system, helping us to get settled and figure out everything we would need.  They also lived in the apartment below us, which turned out to be extremely helpful when the lock on our bathroom doorknob got jammed and I became locked inside late one night.

As mentioned, I did not have only one responsibility. Our main job was working at a primary school, supporting English teachers.  In addition to that, we also supported short-term English programs that the YMCA ran; sometimes these would be day-long programs at a school, and other times, we may support an English immersion camp for a weekend, or maybe even a week.

Additionally, the plan was for us to also support one or more of the local social programs run by the YMCA-Bogotá as well.  We visited three different sites, with a lot of good work being done for worthwhile targeted demographics: extracurricular programs for at-risk children; leadership training and support for youth in disadvantaged communities; family support and vocational training for single mothers or women in abusive relationships; among many others.  However, due to a variety of reasons and priorities in the YMCA office, we unfortunately did not get to support the social programs as much as we had hoped.

Luckily, I was still able to take advantage of an interesting opportunity.  During an early tag-up with Kiara, she asked if there was anything specific I would like to do as part of the Prints of Hope program. I told her that since I had just finished a nonprofit management program through the UCLA Extension Office, I wanted to try and get some top-level organizational experience. Soon enough, I started working with Alveiro, the executive director of YMCA-Colombia on a project that turned out to be extremely rewarding, although the details would probably be boring for you to read about.  It basically entailed some information gathering and evaluation of programs and funding at various local YMCAs in Colombia.  What is great though, is how it opened up the opportunities for me to learn about some of the great activities being done, and actually being able to visit YMCAs in Cali and Pereira to witness some of this work first hand.

I will write in a little bit more detail about the school placement & English programs and my work with the social programs in my next two blog posts, which will be posted in the next day or so. (I plan to keep each of these blog posts relatively brief so you can read them in a short time.)

Choosing this program rather than a standard teaching English program definitely turned out well.  Aside from not having the responsibility of being the teacher of record and not having as long a time commitment as some of those programs, working through this program involved me in a variety of different activities, exposed me to aspects of the country I otherwise would not have seen, and allowed me to meet people from all over Colombia.  While there were some aspects of the program I had wished were slightly different (and I may touch upon them in later posts), this was quite the worthwhile experience and I truly appreciate the opportunity to have been a part of it.

Why am I taking off more than a year to travel around the world?

Why is a man staring down 40 going on a trip that most people usually do in their early 20s, right out of school?

One obvious reason is that even though I often thought about it, I didn’t do it in my 20s, so better late than never.

Another simple reason is because I can.  I am fortunate in that I am currently at a place in my life where I am able to go on such an adventure.

I hope that as I wander through the world over the next several months some of these questions become answered. Yet it is more likely that I will continue to be just as ignorant as at the beginning.  But least I will have experienced more of this world that we all share.

My plan is that the majority of this trip will be spent working on a variety of volunteer and service projects in different areas of the world.  That is not to say that there won’t be selfish travel adventures purely for the experience, because that is definitely a goal as well.  Yet, I do want to spend most of my time feeling trying to be constructive and not just being a tourist.

This leads to an important note, “voluntourism” is a cottage industry that has really grown over the past decade.  However, because of this the efficacy of this phenomenon is rightly questioned.  Oftentimes, at best, the volunteer is doing little or no actual good.  Other times, it can actually be counter-productive, by denying locals employment opportunities or even worse causing exploitive situations such as “orphan renting”.  Because of this, I am trying my best to investigate the projects in which I plan to participate in order to ensure that they are truly beneficial programs.  I also am well-aware that I will have very little actual impact myself (if any at all) in my short time of supporting these projects.

Instead, I hope to have slightly more impact through this blog.  My goal is to share inspiring stories of what is happening around the globe and how people are striving to make this world, which often seems so dark and brutal, a little brighter for the future.  When telling these stories, I plan on sharing information and links about the programs so that if you are so inclined, you may be able to support their efforts.

Thank you for reading and if you continue to read about my travels in the future, even more thanks.  But what I will appreciate even more is that if you are inspired by a certain program or story that I share, please try to support that program, or search for some similar way to help in your local community.

Here’s to a smaller and better world!